The Marthasville Volunteer Fire Department was started in 1928 to provide the citizens of Marthasville and the surrounding area with a volunteer fire department with a professional attitude. Since then the department has grown with the population and size of the area that it provides protection for. The department now has three stations and 12 fire trucks of various types. One thing that hasn't changed over the years is the dedication of the volunteers that make the department possible.

If you are looking for a productive way to give back to the local community, then perhaps you should consider joining the Marthasville Volunteer Fire Department. We are always looking for exceptional citizens who posses the characteristics to make a good public servant. To be a firefighter an individual must be willing to devote the time necessary and be able to handle the variety of difficult tasks that naturally come with the job. You won't receive a paycheck at the end of the week for your hard work but you will walk away knowing that you did something good and made a positive impact on someone's life. There is no satisfaction like knowing someone is sincerely thankful for all that you have done while helping them. Training starts the first day you join and will never end until you retire. If you think that you have what it takes to become a fire fighter then feel free to stop by and pick up an application from any of the three fire stations or from our website. Applicants must be at least be 14 years of age which is considered the Cadet program which is ages 14-18. Applicants 18 and up that wish to join would be considered probationary members.

Little is known about the departments early history during the 20th century. We do know the department had a band, which held concerts and served meals to raise money for department uniforms.

In 1928, the town of Marthasville took over the reins of city fire protection, although little is known of its management or personnel. We do know the department owned a Model T fire truck and the fire house was located on Main Street on the same lot where the water tower is now located, across the street from Station #1’s current location. A bell in the firehouse sounded the alarm.

In 1945, the city board of aldermen was anxious to relieve themselves of the burden of fire protection and our present organization, the Marthasville Volunteer Fire Department, was founded. The department chose a fire chief and two assistants to manage operations and a president, vice president, treasurer, and secretary to handle the financial and administrative tasks. The first Fire Chief was Mr. Eli Suhre, a local businessman.

There was no tax money available to support the new department so funding was provided by a rural tag system. Rural residents paid about three dollars per year for fire protection whether they owned a two-room shanty or had a mansion located on 500 acres. The department set their protection boundaries at 5 miles.

Funding was also provided by dances, a penny pitch stand at the Fall Festival, barbecues and just about anything, the firefighters could think of to make a buck or two.

The department expanded their equipment and bought a second pumper, a used 1939 Chevrolet / Central. Other than surplus civil defense WWI military helmets, the firefighters had very little protective equipment.

In those days, if someone needed the fire department, and they were fortunate enough to have access to a telephone, they would simply connect with the Marthasville operator and state their emergency. The operator would set off the recycled surplus civil defense city sirens, which were situated around town. The alerted volunteers would respond to the firehouse where they would pick up the house phone and receive directions and information from the telephone operator.

In 1948, the Department moved to new quarters at the corner of Main Street and Third Street. The building still stands today and is used by the City of Marthasville.

A new Ford/Howe pumper truck was added to the departments fleet in 1958. This was Marthasville’s first brand-new fire truck. This truck is still within the department. Currently it is being restored to be used for special functions.

In 1957, Frank Pohl was elected Fire Chief. Frank was a guiding force through all of the departments progress in the next three decades. Frank would remain as Chief until 1982, serving 25 years, and a tenure that will probably never be matched.

Today, Frank holds the permanent rank of Retired Chief and is Past Chairman of the Board of the Marthasville Fire Protection District. Frank was Chairman of the board for 30 years. In 2005, Frank was honored for 60 years of service to the department.

The 60s brought about change for practically everyone, and our fire department was no exception. Dial telephone service had come to Marthasville, eliminating the telephone operator who had been taking emergency calls.

A fire-phone system was put in place so that when someone needed the fire department, and later on, an ambulance, they would dial the emergency number causing the home and business phones of 10-15 firefighters to ring.

Information was collected and an extra button on the phone was pressed , activating the city fire sirens and in later years a voice paging system. The fire-phones were in place for more than 30 years and during that period, every fire, ambulance, information call and wrong number was answered. The departments calls are now received and handled by Warren County Emergency Services.

In the late 60s, the department felt it needed to be more prepared for emergency rescue and extrication services. The usual lack of funds would not deter the volunteers. Extra fund-raisers such as rummage sales were held.

Our area was also affected by a common crisis in rural Missouri. State regulations were forcing local funeral directors to discontinue ambulance service. The Marthasville Board of Aldermen and other civic leaders were willing to fund a local ambulance service, but there was still a need for someone to actually operate it.

Once again, local volunteer firefighters stepped up to the plate. Volunteers took added training and gave their time to run ambulance calls, which came in greater frequency than fire calls. The fire department continued to provide ambulance personnel until the mid-1990s when the Marthasville Community Ambulance District assumed all personnel responsibilities.

With the addition of the newly formed rescue squad and a recently acquired brush jeep, the department found itself in the midst of a housing crunch. With the two-bay block building at Main and 3rd overflowing, a modern four-bay steel building was erected at 405 East Main In 1969.

The new firehouse was built with mostly volunteer labor provided by its members. With the addition of the ambulance, it was already too small when it was dedicated in 1970.

By the end of the 1960s, the departments protection area increased to an 11-mile radius. Rural dues were increased to $7 a year.

Things were still changing in the 70s. In addition to the challenges of staying current with both fire and ambulance training, the departments cash flow was becoming less adequate every year. In 1976, the Marthasville Fire Protection District was formed with the protection radius increasing to 18 miles. The 1977 budget was approximately $14,000, enabling the department to add a station in Treloar and renovate the station in Marthasville, adding more space.

Throughout the 80s and 90s, things rolled along smoothly. New apparatus and better protective equipment was purchased regularly and training became more accessible.

The volume of calls also increased dramatically over the years. In the 1960s, the average number of calls annually was 25. During 2007, the number could be 10 times that.

During the Flood of 1993, the firehouse was staffed almost around the clock every day when the river was at or near its highest crests. In addition to their normal duties, firefighters assisted with sandbagging, evacuations, logistical support to other agencies and doing whatever they had to do to get the people of our protected communities through this crisis.

In 1997, the third station in Dutzow was dedicated. Moreover, like the other two stations, it was built with volunteer labor from our ranks and the residents of the Dutzow community. Dollars saved by the volunteer labor enabled us to spend our money where we think it does the most good. – On up to date and quality equipment.

In September of 2003, The Marthasville Volunteer Fire Department celebrated its 75th anniversary. An open house was held at all three stations and the anniversary was marked with a jubilee banquet and dance.

Our department can also boast several firsts in our county, we were the first to have diesel powered automatic transmission equipped fire apparatus, we had the first power hydraulic (Jaws of Life) extrication equipment, the first thermal imaging equipment and the first department equipped and trained for ice rescue. There is one thing however that we are ‘last’ at. We are the last all volunteer fire department based in Warren County.

Today, the department boasts a membership of 30 and growing. The department operates out of 3 stations and 12 apparatus and one staff vehicle. The men and women of the Marthasville Volunteer Fire Department spend a lot of valuable time away from their families continuously training and learning the profession they do to protect the community they live in.

Finding ourselves in a new millennium, some of the upcoming challenges we are aware of. Others, we are not. However, whatever they may be, we feel confident the Marthasville Volunteer Fire Department will rise to any challenge.

For your car seat install or inspection please contact: 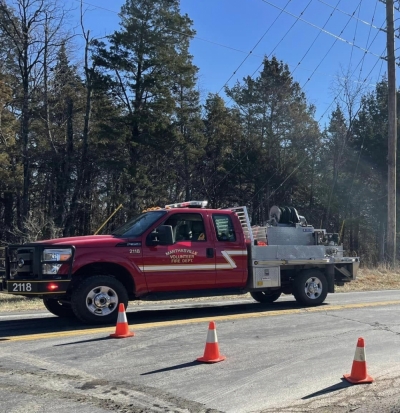 This site has been viewed 61,659 times.
Calls
News
Events
Pictures
Apparatus
Maintained by the members and staff of Marthasville Volunteer Fire Department. Designated trademarks and brands are the property of their respective owners. Copyright © 2006-2022. YourFirstDue Inc. All Rights Reserved. Content on this web site is supplied by Marthasville Volunteer Fire Department. YourFirstDue Inc. cannot be held responsible or liable for any content, text, pictures, or any other media found on this web site.
Management login
Powered by